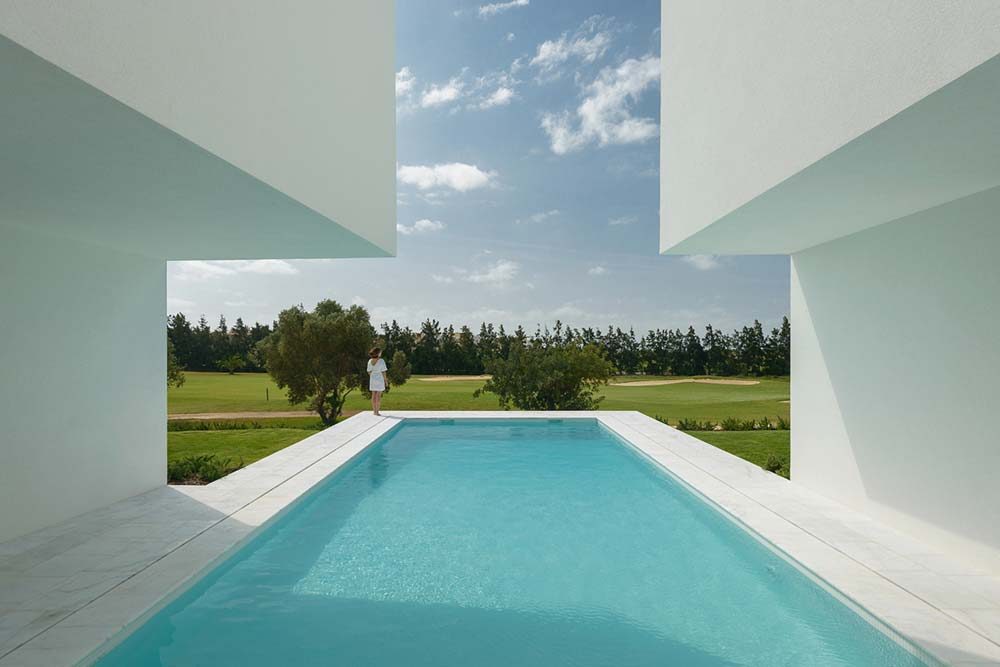 Between Two White Walls exists a thoughtfully enclosed, formally pure, and existentially self-aware work of residential architecture. It’s a home as introverted as it is grandiose – a sculptural wonder designed by Portuguese architect Corpo Atelier. The home is protected on two sides against exposition to future neighbors, and in between celebrates both sight and experience, leaving the ever-flowing volumes of interconnected space to do all the talking.

The home was built adjacent to an existing golf course surrounded by undeveloped, vacant lots. The owners were worried that the future inhabitants of those lots might create a sense of unwanted insecurity, so they decided to conceptualize the design as two opposing bookends – pulled apart and twisted on top of one another to carve out an interior that celebrated itself above anything else.

The exterior is composed of rectangular geometric volumes with sharp corners and deep inlets, covered entirely in only white stucco and punched openings for windows and doors. It steps back in the middle, creating a courtyard space that can behave as both interior and out. Little is given away about what happens beyond this blank canvas, giving visitors an inherent sense of curiosity, which soon gives way to amazement and spectacle. It’s the complete lack of definition that makes the Between Two White Walls house such a sight to be seen. It’s almost as if you’re watching a movie that hasn’t quite been finished, but is so structurally and fundamentally sound, you can’t seem to pull your eyes away. It makes you ask questions about the process of design, and the very act of living. There are surprises to be found, but they are strictly internal, letting your imagination fill in the gaps where the architecture falls away.

There is a certain threshold architecture crosses when it stops becoming a vessel for living, and evolves into an expression of human thought. Such is the case with the Between Two White Walls house, as it moves beyond curb appeal and linen curtains and directly into the realm of fine art. Corpo Atelier have presented an idea in the form of a massive white sculpture – one that just so happens to be as pleasant to be in as it is a powerful symbol of existence.